The employment landscape, not just beyond the horizon but already in view, demands a different approach to skill formation and career planning. The terrain has already been, and as predictions suggest will continue to be, shaped and altered by a unique convergence of circumstances, often referred to as megatrends. The World Economic Forum (2016) identifies these circumstances as a combination of demographic, socioeconomic and technological 'drivers', many of them already having an impact on production, business models, modes of working and skill needs.

New technology has seen some jobs replaced by automation while new roles have emerged as a result. Analysis from McKinsey suggests that automation is likely to replace 45 per cent of activities within jobs but only five per cent of full jobs. Technological advances have also created new ways of conducting work. Phenomena such as the 'gig' economy, where work comes in the form of short-term contracts, and 'platform economy', where the labour exchange between employers and employees takes place online without the usual safeguards for both parties, have altered the labour market.

Geographic distance is no longer a consideration for production of goods and services, and collaboration between international colleagues can take place via enabling technologies.  This combined with the ageing of the population, where many people will continue to work into their mid-60s, and increasing migration of people around the globe, will create an increasingly diverse workforce.

What skills are needed?

'The skills revolution' reports the results of a recent survey of 18,000 employers across all sectors in 43 countries. The findings suggest that, although changes have taken place in the labour market in the past, the life cycle of skills is now shorter than ever and the scale of change is unprecedented. People will therefore need new skills more often to stay employable, possibly for jobs that have not yet emerged. But which skills will be important?

A recent report from Deloitte Access Economics argues that soft skill-intensive occupations will account for two-thirds of all jobs by 2030. These soft skills are described as self-management, professional ethics, digital literacy, teamwork, critical thinking, communication, innovation, emotional judgement, and problem solving. The World Economic Forum, in their 'New vision for education', outlines the skills that students will require for the 21st century. These are grouped together as foundational literacies, including digital literacy (core skills applied to everyday tasks), competencies (approach taken to complex challenges), and character qualities (approach taken to a changing environment).

'Tomorrow's digitally enabled workforce' highlights the importance of entrepreneurial skills and aptitudes as jobs may not be there for an increasing number of future job seekers and individuals may need to create their own job. The Foundation for Young Australians identifies relationships between jobs and proposes that skill sets of many jobs are 'portable' to other jobs. This 'new work mindset' embraces clusters of related jobs where young people and other job seekers can think about how their existing skills would be valuable for multiple different roles and employers could consider potential employees from different occupations with similar skills.

In 'The growing importance of social skills in the labor market', the author notes that while computers perform cognitive tasks of rapidly increasing complexity, simple human interaction has proven difficult to automate. Accordingly, the labour market increasingly rewards social skills, with jobs with high social skill requirements experiencing greater relative growth throughout the wage distribution since 1980.

With new ways of working, and jobs that may not exist yet, children need to be engaged at the early stages of education to create a foundation for success in the future labour market. The report 'Digital skills for the UK economy' recognises that 'exposure' to technology is not the same as having skills in place to best use technology, and recommends that digital literacy needs to begin in primary school so that students are digitally literate by the time they leave school.

However, as noted, it's not just technical skills that will ensure a successful career in the decades to come, both technical and soft skills are required to be employable, well-rounded citizens. 'The future of work: setting kids up for success' states that a balance between hard and soft skills provides the best foundation for entering the workforce. Education therefore needs to be adjusted to integrate technical, social and emotional skills into the curriculum. Schools in the UK and Australia are currently addressing this by emphasising transferable skills such as teamwork and problem solving in all areas of the curriculum - creativity, interpersonal skills and critical thinking are crucial, as it is these skills that differentiate people from the artificial intelligence (AI) that allows for the automation of some jobs. Governments and schools are also implementing programs to prepare kids for future careers, particularly within science, technology, engineering and mathematics fields, and recently widened to include entrepreneurship, art and design.

One problem faced however is that often teachers in schools don't have the training to deliver digital skills programs, such as coding. Solutions to this issue are being addressed through the use of volunteers (Code the Future) and community groups (Code Club Australia, Code4Fun), after school clubs (MakerClub), and Government initiatives (England's Schools computing curriculum and the Digital competence curriculum in Wales). In Australia, the Federal Government has allocated 3.5 million dollars over four years towards a Coding Across the Curriculum initiative to support teachers to deliver key technology learning areas, and the Queensland government also announced coding would soon be compulsory in all schools. In Belgium, Finland, Estonia and the Netherlands, coding is already part of the curriculum in primary school.

Connecting kids with opportunities for real-world experiences can also better prepare them for the future. Learning that delivers practical applications (for example maths to develop skills in budgeting, logic, statistics and probability) as well as access to relevant work experience provides students with an insight into work that helps them make successful career decisions. The report 'From school work to real work: how education fails students in the real world' looks at the gap between what students learn in school and their experiences once in the workplace. The report highlights the current disconnect between school learning and the world of work, showing that students, once in the workplace, feel they would have been better served at school if they were taught more technical skills than academic skills. It's the skills and judgement to use knowledge, rather than the knowledge itself that is important.

'Realizing human potential in the fourth industrial revolution: an agenda for leaders to shape the future of education, gender and work' (2017) discusses how the rapid developments and changes in technology are transforming and disrupting industries and professions, 'shortening the shelf life of worker's skill sets'. In order to remain employable for the future, workers will be required to continually re- and up-skill throughout their working lives. While it is important to appropriately train young people for the future of work, it is vital to provide ongoing adult learning and re-skilling opportunities to existing workers to support them through the predicted 'numerous transitions that will likely characterise future employment' ('The future of work: skills and resilience for a world of change', 2016).

As discussed above, digital disruption has brought about significant challenges and opportunities to the world of work: as automation replaces jobs that rely on routine task, such as seen in manufacturing and clerical jobs, the digital revolution has also created new occupations that didn't exist a few years ago. In 'The future of work, skills and resilience for a world of change', the authors describe a shift that is occurring from workers operating machines to workers monitoring, interpreting and 'creatively defining what needs to be done and how, and then using robots to achieve precisely that'. The report identifies that occupations that require both technical skills and strong social, interpersonal, analytical and problem-solving ('soft') skills are on the rise.

In 'Cross-occupational skill transferability: challenges and opportunities in a changing economy' (2016), the authors focus on the value of transferable skills in ensuring a worker's occupational mobility. They identify transferable skills as soft skills and generic hard skills - technical skills that can be applied to a variety of occupational contexts. The authors discuss how 'occupational clusters', where similar groups of occupations across industries that share elements of skills, knowledge, and desirable personal attributes, have the potential to facilitate occupational mobility. The authors argue that it is crucial, especially in instances of retrenchment, 'that the concept of skills transferability must be understood by all of the key players': the affected workers, their current employers, their future employers, the training providers, as well as the job support agency, whose role it is to ensure that the retrenched workers transition to appropriate jobs.

As discussed above, improved lifelong learning opportunities are vital for existing workers to remain employable across industries. The World Economic Forum white paper argues that this will require collaboration across governments, educators and industry/employers in 'developing and strengthening an educational infrastructure to enable ongoing learning and training opportunities for workers at all stages of their careers'. The paper cites Singapore's SkillsFuture, among others, as a success story in illustrating best practice in 'transforming education ecosystems'. 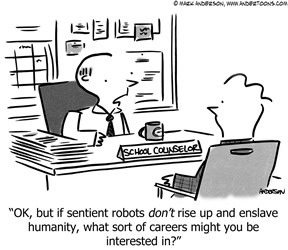 How is the gig economy affecting the workforce?
(Source: Jeanne Meister on YouTube, February 2017)

Jobs of the future will be what robots can't do
(Source: Big Think on YouTube, November 2016)

We encourage you to explore the following Pod Network pages for further information: