The aim of this product is to provide easy access to information that tells the story of VET in Australia. This page provides links to key documents and timelines that cover aspects such as the development of the VET system, the genesis and development of VET research, and the development of auditable non-financial transaction measures of VET activity.

Publications on the history of VET in Australia

Development of TAFE in Australia 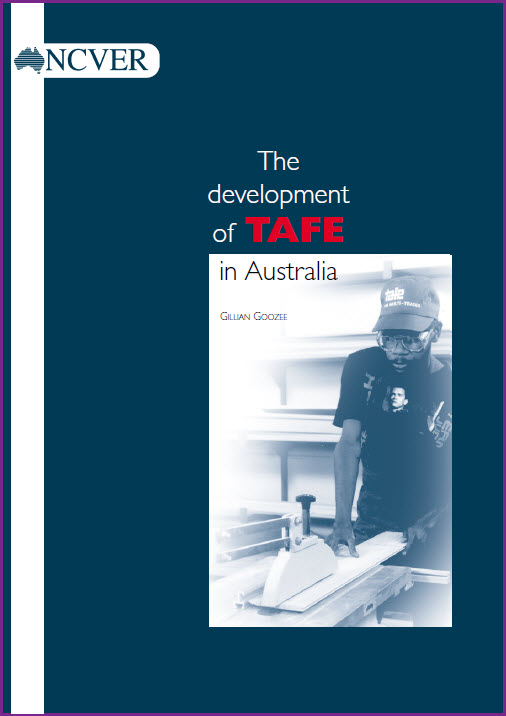 This book by Gillian Goozee provides a history of TAFE policy and administrative arrangements, focusing on the developments that have occurred within TAFE. The key themes are the impact of the increasing level of Commonwealth Government intervention in TAFE policies and programmes, the interrelationship between the Commonwealth and States from the 1970s to the 1990s and the change in focus of these policies and interrelationships from a humanistic approach to an economic and industrial relations approach. Earlier editions: 1993, 1995.

Development of Australia's national training system: a dynamic tension between consistency and flexibility 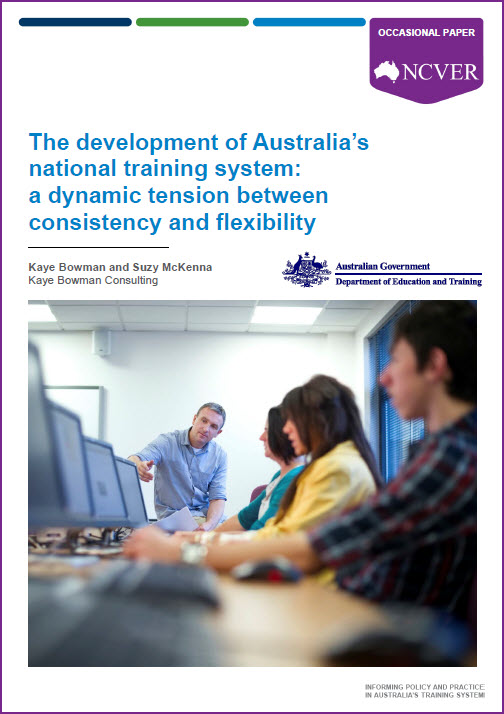 This paper by Kaye Bowman and Suzy McKenna reflects on the history of VET in Australia, from 1992, when all nine Australian governments made the landmark decision to create a nationally coordinated vocational education and training system, up to mid-2015. It identifies the rationale, objectives and key elements of the training system, outlines the main reforms, and explores the dynamic tension between consistency and flexibility that exists in the system, including in the implementation of the student training entitlement funding model. 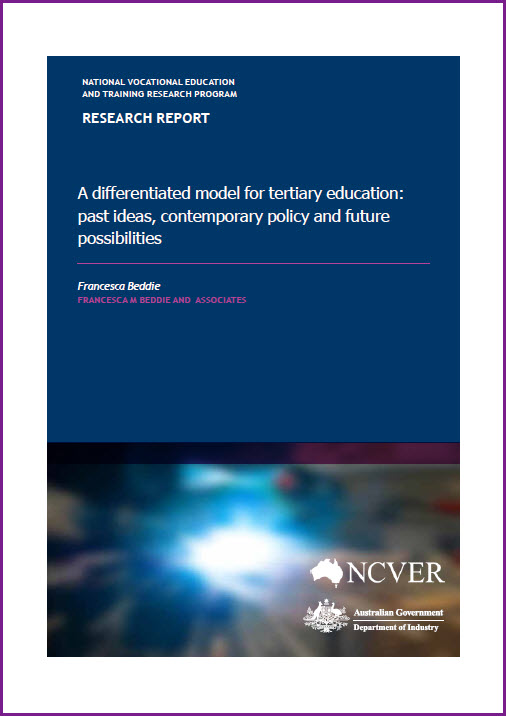 This report by Francesca Beddie looks back at the binary system, as well as its demise with the Dawkins reforms of the late 1980s, to uncover the lessons learned. Four main issues are identified as enduring problems for tertiary education: the diversity and parity of esteem between the various elements of the tertiary education sector; the pathways within education and to the labour market; the place of research in mass tertiary education; and governance and autonomy. The report was published in 2014, on the 50th anniversary of the binary system.

Evolution of apprenticeships and traineeships in Australia: an unfinished history 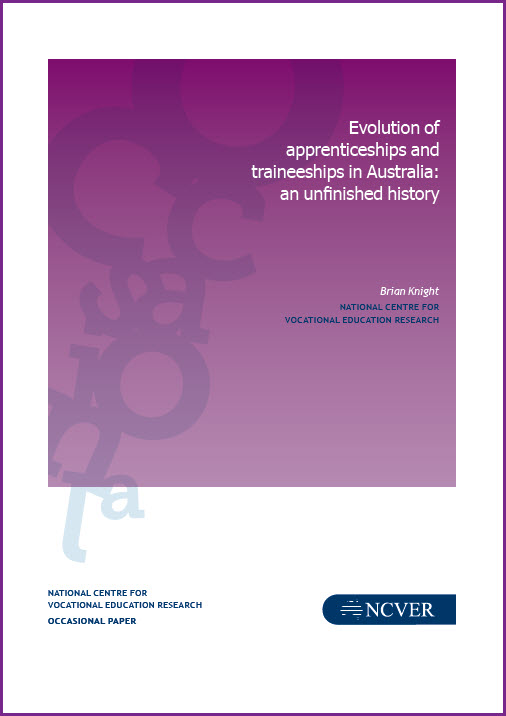 This paper by Brian Knight traces the evolution of Australia’s apprenticeship system from European settlement in 1788 up to 2012, including the various policies, social changes, and skill needs that have influenced how the system developed into what is in place today. A major theme is that the community, employers and employees have mostly had a conservative approach to apprenticeships. Most change has occurred since the introduction of traineeships in 1985 and the payment of government incentives to employers from the mid-1990s.

History of technical education in Australia: with special reference to the period before 1914 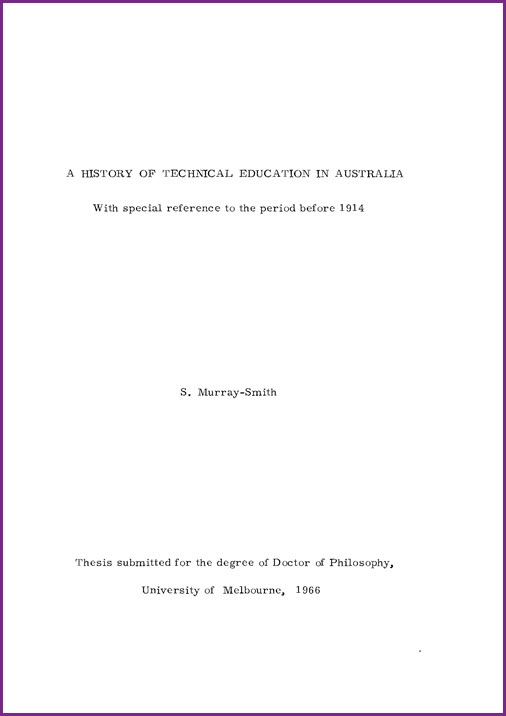 This paper by Phil Loveder and Hugh Guthrie describes the genesis and development of research in VET in Australia over the 40 years from the mid-1970s through to the present, a period of significant and dynamic change in the VET landscape. It traces the origins of research from the watershed Kangan Committee report of 1974 through to the present national program of research. It also discusses the future of VET research in Australia and identifies some challenges facing research in the system going forward. 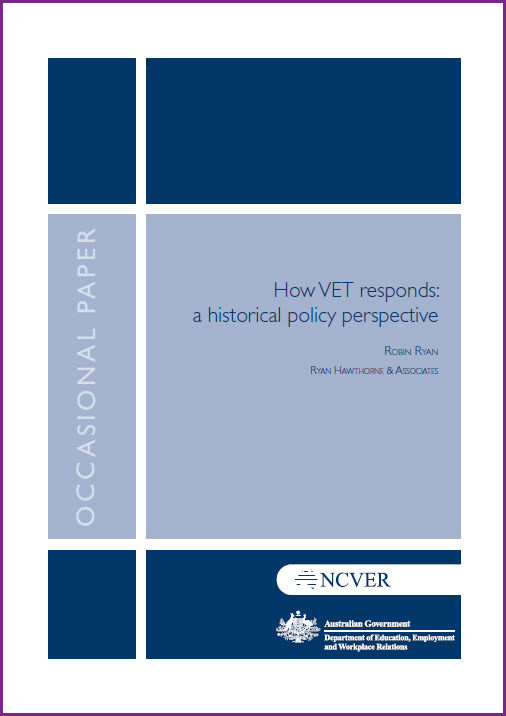 This essay by Robyn Ryan provides an analysis of the interaction of policy with VET in Australia. It considers the evolution of the VET system since European settlement but focuses mainly on changes that have occurred from the 1980s to 2010. It discusses the underlying influences of key reforms, including the training reform agenda, which had as its main aim the establishment of a national system. Also discussed are the programs and policy milestones that have shaped the VET landscape. 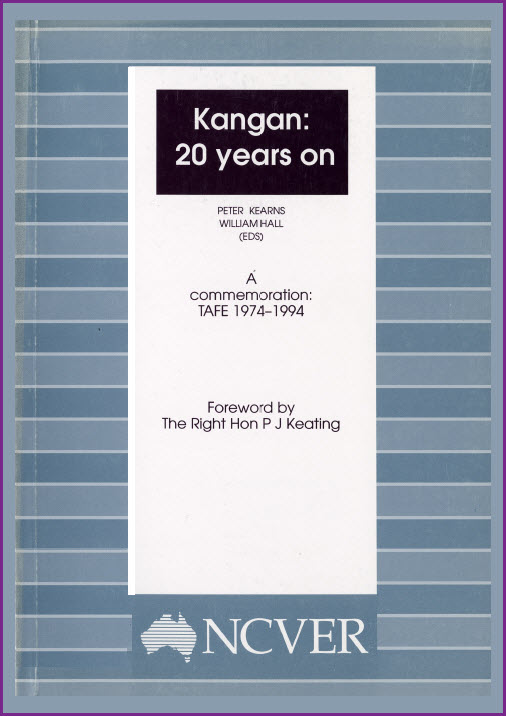 This book, edited by Peter Kearns and William Hall, contains a series of essays that were presented at the commemoration of the 20th anniversary of the landmark Kangan Committee report of 1994, TAFE in Australia: report on needs in technical and further education. The Kangan report was a defining moment in the history of VET: Myer Kangan saw VET as an integral part of the education system, with a responsibility for the development of individual capacities similar to that of schools and universities. The essays look back at its achievements.

Keywords and key phrases in vocational education policy in Australia: a lexical semantic analysis of knowledge and skills 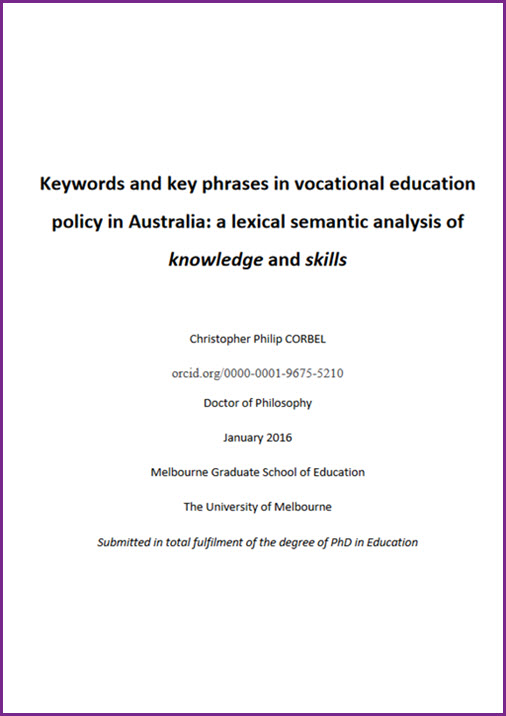 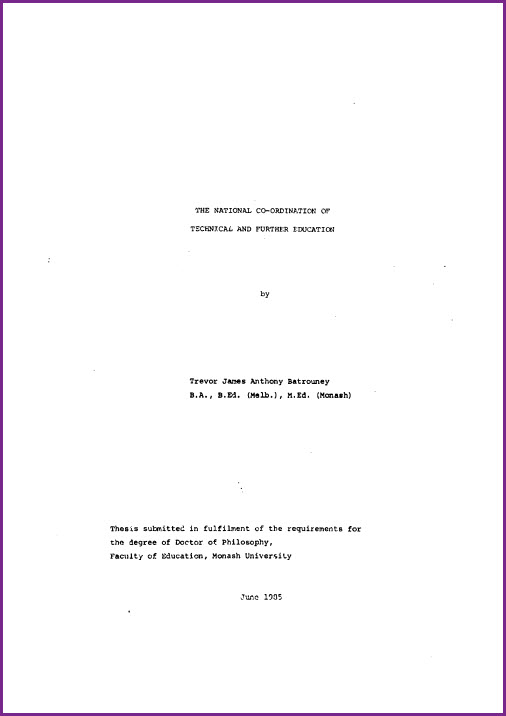 This thesis by Trevor Batrouney analyses national coordinating agencies in TAFE in terms of their relationships with the Commonwealth government and groups at state and institutional levels during the period 1973-1981. A complex system existed with coordinating agencies being established by governments at both state and federal levels and covering universities, colleges of advanced education, and technical and further education (TAFE).

A more extensive set of publications on the history of VET in Australia is available in VOCEDplus (Tip: use the filters on the left of the VOCEDplus search results page to focus the results to specific aspects of VET).

How to cite this page

This page is a product in the VET Knowledge Bank, a living resource that NCVER continues to develop and update on an ongoing basis.

We value your feedback and welcome comments and suggestions.