These special collections have been compiled by the VOCEDplus team and allow users to quickly browse sets of records within collections. Some items can belong to more than one collection. If you have feedback or suggested titles, please contact us.

VOCEDplus also plays a key role in the archiving and preservation of research. Historical documents from collections not previously available in digital form have been digitised and made freely available online with the permission of the copyright owner.

More about the collections

This collection comprises selected key documents that have influenced the development of vocational education and training (VET) and higher education (HE) systems in Australia. New documents are added on an ongoing basis. Some have had several years to exert influence whilst others have been added more recently because of their status as major policy documents.

Many older reports are freely available in digital form for the first time via VOCEDplus: 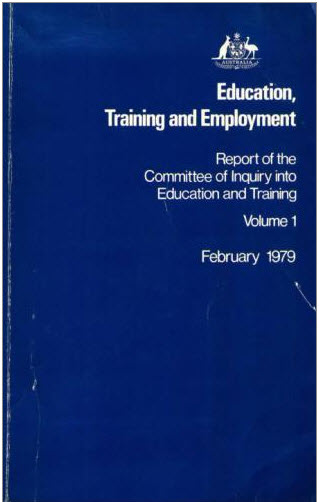 The Adult Literacy National Project (ALNP) had the primary objective of funding and promoting research, resources and projects in the field of adult literacy in Australia. The project is no longer funded.

The Adult Literacy and Numeracy Australian Research Consortium (ALNARC) was a national collaboration between five university-based research centres that was funded under the ALNP funds.

Reframing the Future (1997-2008) was the major VET workforce development initiative of the Australian, State and Territory Governments.