According to the Oxford Index parity of esteem is used, particularly in political policy discourse, to refer to an equality in status between routes of study, particularly ones where such equality could demonstrably be argued not to exist. Parity of esteem is often evident in discourse comparing vocational education and training (VET) to academic education, where there is a prevailing opinion that VET is a second-class educational pathway. Attempts to create parity of esteem to improve this perceived distinction between VET and higher education and the low status of VET courses, qualifications and quality, requires a change in the views of society, employers, and students regarding the prestige of university degrees over VET.

Best practice approaches to achieving parity of esteem in education and training: final report (Huggins, R, Harries, S, Lewis, S, Gordon, J & Libert, I 2003) proposes the following indicators as benchmarks to help policymakers assess to what degree parity of esteem has been achieved in a region's learning system:

The lack of parity of esteem between VET and higher education has been a perennial problem, fuelled by the nature of occupational hierarchies as well as those in tertiary education. Without a change in mindset that allows a debate about entirely new approaches to post-school education, it is likely these will persist (Source: Beddie, F 2015 The outcomes of education and training: what the Australian research is telling us, 2011-14).

Over the years, achieving parity between vocational and academic education has been a goal of many reforms to the postcompulsory education systems. In 1989, the term 'Cinderella service' was coined by Kenneth Baker, ex-Minister of Education in the UK, to reflect the lack of government attention and focus on the further education sector. Today, achieving parity between vocational and academic education continues to be an important issue in many countries.

According to a CEDEFOP 2011 research paper, Vocational education and training at higher qualification levels, parity of esteem in learning opportunities is greater in countries like France, Ireland and England, where progression from more vocational to more academic study programs is supported.

More research on this topic is available in the VOCEDplus database.

IQ2 debate: Having a degree is grossly overrated 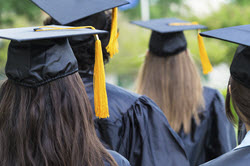 Presented by the National Centre for Vocational Education Research (NCVER) in partnership with St James Ethics Centre, 2012 'No Frills' conference.